Westbourne have been very fortunate in recent years to run cars in the most prestigious Historic event of the motor racing calendar. Since 2016, Westbourne Motorsport has been regular competitors in the St Mary’s Trophy for Saloon cars from pre 1960, the years of when the British Saloon Car Championship (BSCC) began with famous drivers such as Jack Sears and Tommy Sopwith. The St Mary’s Trophy has always been a favourite to the crowd at the Goodwood Revival which not only sees the cars racing as they did back in period, but they are driven by top celebrity drivers which Westbourne have been fortunate to meet and run. This includes the likes of current BTCC drivers Tom Ingram and Adam Morgan, former Mclaren Formula 1 driver Jochen Mass and even a celebrity from television in the form of Rowan Atkinson (Mr Bean, Johnny English.) 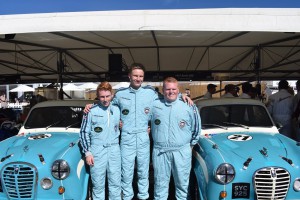 In our first year of competing at the Revival in 2016, it was an all Austin A35 Academy race the first time the St Mary’s Trophy had been a single car grid since 2009. We had been running our two family built A35 and A30 in the HRDC that season with lots of success with class wins for James Colburn. In qualifying for the owners race, the expectations of the team were surpassed when James got an amazing pole position on his first ever visit to the Goodwood Revival and Ben Colburn also qualified a surprising 3rd place on the grid meaning both Westbourne cars were on the front row for Sunday’s race at their first attempt at Goodwood. It was also special for Ben as he was and still is the youngest ever driver to ever race at the Revival at just 16 years of age! Unfortunately, the race was not as successful as qualifying as James had engine failure half way through the race while out in the lead which was very frustrating for Westbourne. Ben however, went out in a more spectacular manner with a terrifying barrel roll on the exit of Madgwick, not the way Westbourne would have wanted to end their first ever Revival but it still had promise for the future and showcased both Colburn brothers’ talents. 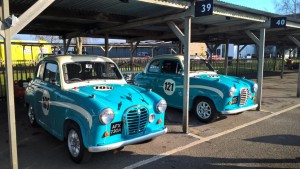 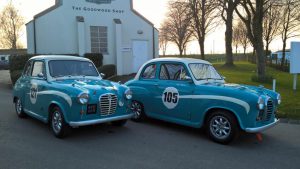 The following year at the Revival, Westbourne ran an Austin A35 Speedwell (below) driven by James Colburn and Adam Morgan in the St Mary’s Trophy where the car finished as the highest A35 in the overall aggregate result of the two races. James returned with the same car in 2018 this time however in the Jack Sears Memorial Trophy a one off race to commemorate 60 years of the BSCC/BTCC where unfortunately James again had engine trouble so was unable to finish the race. Ben Colburn was also in action in the same race however this time he swapped his cheeky little Austin A35 for the singer Chris Rea’ Morris Minor police car! (Below) This being the first time Ben had driven the car and after problems in qualifying, meant that Ben had to start at the back of the grid. A brilliant drive in the race made up for the poor qualifying after Ben managed to gain 17 places to finish a brilliant 13th in the Morris Minor. 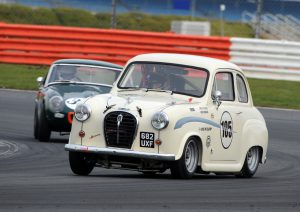 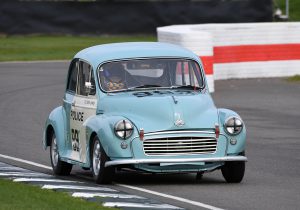 Last year, Westbourne ran two very different cars to what they have ever done before in the shape of a Standard Vanguard Six and the unusual MG YB. (Both below)  Both cars had been built last year by Westbourne in which we pride ourselves of having the best looking cars on the grid but also some of the fastest! We always enjoy going to Goodwood and are always keen to take on new cars that want to be run at the Revival or even throughout season! 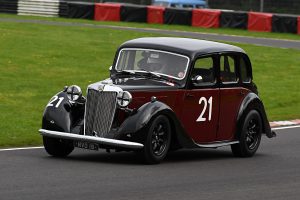 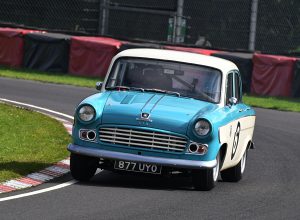